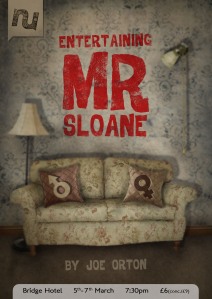 In a house on the edge of a rubbish dump, 20 year old Sloane comes looking for a place to stay. Kath, a middle-aged spinster, agrees to lodge him in return for his sexual favours. Then her homosexual brother Ed visits and the two of them proceed to compete for Sloane’s attention in the bedroom, creating for themselves a tangled web of seduction and manipulation. Then, when it becomes clear that they are in fact playing host to a complete psychopath, their cosy arrangement comes under scrutiny and raises the question of who is really in charge; something made difficult by the fact their liaisons in the bedroom have blurred the lines somewhat.