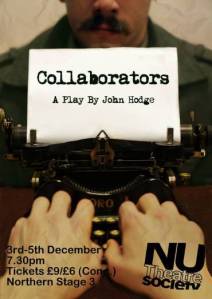 Millie Walton of The Courier gives the NUTS production of Collaborators an outstanding five star review:

Performed in one of Northern Stage’s more intimate spaces, the audience was small and close to the action. This meant that there was absolutely no room for error. The cast handled the pressure effortlessly though, maintaining energy and complete absorption throughout.

The set design was effective through simplicity providing the necessary authenticity to establish a believable sense of place, but also allowing for creative scope. Perhaps the most fascinating part of the production was the more surrealist scenes in which the playwright and protagonist, Bulgakov was haunted by chilling nightmares as the boundaries between the real and the imaginary became increasingly blurred.

The supporting cast was strong with especially praise-worthy performances from the terrifyingly jolly policeman (Christian Cargill) and the actress obsessed doctor (Charlie Gardner), but it was Scott Jenkins as Stalin who made the production so memorable. Playing one of history’s most hated men is by no means an easy feat, but Jenkins was mesmerizing. Delighting in twisted games of manipulation, Jenkins excellently portrayed the dictator’s unnerving detachment beneath the facade of joviality and generosity. Jake Houghton also deserves recognition for his brilliant and powerful depiction of the guilt torn Bulgakov as he becomes increasingly infiltrated into a regime he knows to be evil.

It’s not often I say this about a play, but if it were showing again there is no doubt I’d be back on the front row. It was of the highest professional standard and utterly captivating throughout. A truly impressive triumph for all those involved.